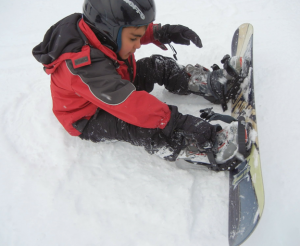 Altai as a 9 year old

When I began attending Snow Sports Northwest and my snowboarding journey began, I was in 4th grade and had recently moved from Oregon. I vividly recall my first day on the board, or rather, my first day with the board strapped to my feet with my butt on the ground. I remember sitting in the playground and watching my instructor, Forest, take a small jump. From that day forward, I’ve been hooked and have spent 6 years riding, pausing only due to a lack of snow and the pressures of junior year.

During my third year, Danny and several other friends joined the program. In hindsight it seems that was the catalyst that brought me out of my shell. An introvert by nature, I always found social situations challenging, but it seems a few friends made all the difference. From there I began to sell at the snack bar, ironically an exercise in extroversion, that was nonetheless enjoyable. It was at that time when I began to form friendships within SSNW and excitedly return every winter to rekindle them. For the several years that followed I continued to co-run the snack bar; the occasional free drink and friendly face all that I needed to keep me coming back.

From there, I became an assistant instructor, something I was initially hesitant to do as I did not believe my skill was of the caliber students deserved and that I once received.  Nonetheless I found the job incredibly fulfilling and getting to bond with young kids via my passion is something I will never forget. Children in that respect, are an area I particularly enjoy; I have also spent my last several summers volunteering at a summer camp for school age kids, motivated by the same ability to inspire them and grant them lasting memories.

Snowboarding and the organization I’ve been a part of for over half a decade has left a lasting impact on me in ways I could not have imagined as a nervous 9 year old. I hope to continue my snowboarding journey and my involvement in SSNW, but for the time being I’m incredibly thankful for the memories it has granted me, and I hope I’ve been able to give back even a small portion of that to young and rising boarders.

Thank you greatly for everything you’ve done for me as a snowboarder and young adult and for the good I see your organization produce! As I prepare for college and a degree in business, political science or philosophy, and hopefully a lifetime as a leader, I’ll remember my years at SSNW, always as a as a student and later a teacher, as some of the greatest of my admittedly short life.

View all posts by Ryan Clark →
What is this school about?
2019 Welcome Orientation Presentation